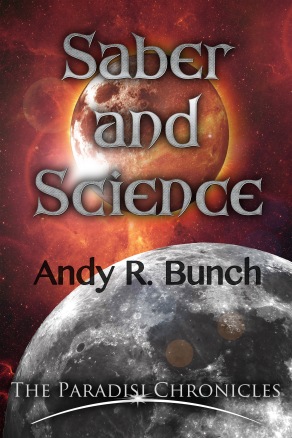 *The information in this page is entirely from the research and imagination of Author Andy R. Bunch. It bears no deliberate connection to anyone in real life and any artwork or ideas contained herein are merely part of my own research posted here for my readers’ enjoyment. Where ever possible attributes are given to source material if I don’t own the rights to it, but if I’ve unintentionally stepped on someone’s copyright please contact me through this site and I’ll attempt to remedy the issue.

The Paradisi project was a unique opportunity for me, with a dozen authors dropping a book in the same universe on the same day. It was also the first time I’d been able to do that much promotion before beforehand.

If you’ve visited this page before then you saw most of the notes below, which we’re character sketches and information about the planet itself. Now that part one is out, it’s a little obsolete, but I’m leaving it here for two reasons. 1) it might be a little interesting to fans, and 2) the Paradisi universe is open source and other authors can use this as a resource when writing their stories.

Note: I whipped through and cleaned up some typos etc. but I’ve not corrected it for last second changes made to the universe (and there were tons the week prior to publication date). There’s also another set of books written already, set in part on Tenebra. Andy McKell will have his next book (Jaunus Arrival) out in his series soon, which will give him almost as much time on Tenebra as I have in print.

My next book in this series has been delayed yet again. I’m very sorry. Dark and Derelict continues in production and we all hope to see it soon. To buy book one follow this link to Saber and Science.

Below are notes I created while researching the book and it’s characters in order to be consistent and detailed throughout the creative process. I keep material like this in Scrivener while I draft and often add more details during various revisions.

Concept image of Weapons and Armor 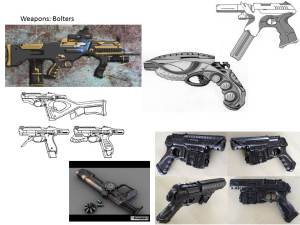 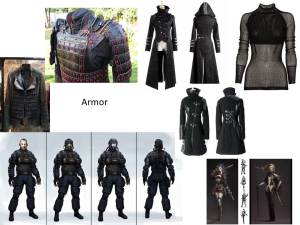 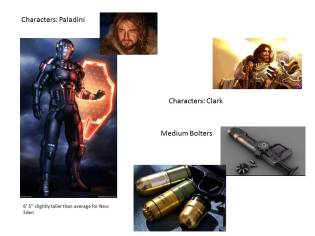 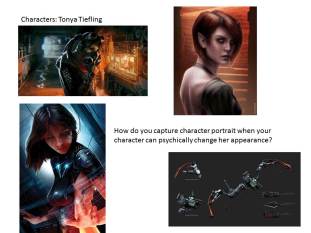 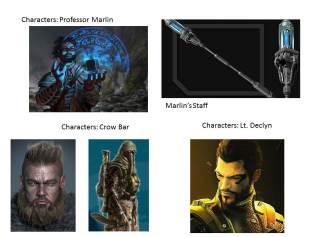 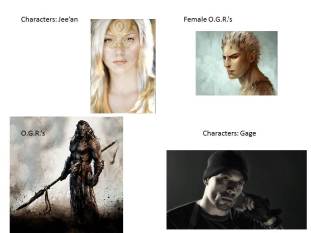 I make use of something I call an auto quad here’s a video that should give you a better idea.

Here are some rough notes about the climate of Tenebra that I don’t think will include any spoilers, but just in case, here’s your spoiler alert!

Tenebra has a very limited diversity of species made slightly more complex through an early attempt to terraform the planet. The original ecosystem consisted largely of bacteria with a few insects capable of withstanding the hot, thick atmosphere of the slow turning light gravity planet. The terraforming attempt is a bit of a mystery. No one is sure what government entity decided to do it or why they stopped, but it resulted in killing off a few million kinds of bacteria and creating an atmosphere capable of few species of bio-engineered heard animals.

They have some sage-like plants that bloom during a brief fertile season. Much of the “plant life” is bacteria which supports a variety of insect including a large flying ant (Q. Fu), who incubate their eggs under the skin of larger mammals (sometimes in mass with fatal results). Eating the insects are a small variety of mammals (mostly rodents). Someone introduced a gene-spliced herd creature that’s at least partly goat. Most strange is the sudden appearance of OGR’s, humanoid creatures which seemed to spontaneously appear after the terraforming and who seem to be able to breathe Tenebra’s air without any filtration.

Tenebra has a thick atmosphere with a low percentage of oxygen comparable to 10K foot elevation on Earth. Space dust filters through the atmosphere and the wind gust almost constantly, almost always in one direction. In size, it has roughly 80% of New Eden’s (Earth’s) gravity. Spin direction (as yet undetermined). There’s no large body of water to regulate temperature but early attempts to terraform the planet have created an enhanced greenhouse layer and stabilized the climate. Nighttime temperatures no longer dip below freezing and daytime no longer soar over 100 degrees. Terraforming also left the sky cloudy day and night.

Tenebra still has a small molten core surrounded by thick crust. Several ranges of volcanic mountain were born long ago and have worn down to be very tall hills. Still, pyroclastic flows (containing some rare metals) form a network of crags and ledges which break the constant wind. The age of a hill can be determined by examining the wind erosion. Old hills look like an ocean wave with a slope leading up to the crest and a sharper drop off on the lee side.

All settlements and above ground structures are built on the lee side of a mountain. On the windward side of these, sand mounds up in giant dunes. The largest of these dunes are in the badlands. It’s hundreds of feet deep of gritty space dust, which acts like quicksand (like catsup). Giant worms swim through these sand dunes devouring bacteria and whatever else is in their way.

Occasional wind storms will move hundreds of tons of sand and settlements must maintain heavy equipment capable of removing the impromptu sand dunes that stack up against their domes. These storms can last for up to two weeks and sometimes cluster together, giving rise to the theory among locals that there is a storm season in the very long Tenebra year.

Water does settle as dew, twice a day, and runs off some surfaces to collect in pools that don’t evaporate for a few hours. The conventional wisdom is to not sleep in a low depression as you may wake up under water. The day (light/dark cycle) is 36 hours long, 18 of which is night. The sun is week and the sky is dark grey (?) in the day. Most people in the settlements keep to a normal 24 hour day and ignore what’s going on outside.

Outside the town and mining areas is off limits because of an industrial accident that set off a natural nuke closing a mine and leaving a radioactive hot zone. In reality, –sentence redacted to delete a spoiler–. The badlands are a buffer no one really monitors between the outpost and the bases.

The environmental family was able to bring in material and build an installation in the badlands with the support of High Command. However, the high command doesn’t know everything they do there. –sentence redacted to delete spoilers–

Some working class and security types didn’t like the New Eden “New Society” thing, so left, led by a man named Darvin Stoutmyer. Barred from leaving the solar system by High Command, they went to Ardesco where they had to be gene spliced and muscle/bone grafted to survive the high gravity. There they became minors, which ultimately made the low-density mining on Tenebra obsolete.

The particular package of body and gene modification was first called a Darvin after the first man to have it done, but due to aesthetics is became known as the Dwarf. How did High Command compel such a fierce group to not leave Paradisi? They pointed to a small print in the contract that forbids anyone or their descendants from seeking to return once they’d taken a spot on a ship (The abandonment of duty clause). Stoutmyer decided it would be dishonorable not to abide by the contract his ancestors signed.