I know I promised you the core reason for Primacy before Identity, and I’ll go there ASAP. One quick note though: If your response to the last chapter was any form of negative emotion, let’s deal with that.

The nature of this journey is from Glory to Glory (2 Corinthians 3:18). We will constantly be learning better ways to do this thing called life and there’s a tendency to be ashamed of where we’ve been. Our transition is eased greatly by humility. Or maybe more on point, it’s wounded by pride. If this is you, I recommend you take time right now to read the appendix entitled, “Humility: the secret to accelerated learning.”

Let me lead by example for a moment. God convicted me recently, of my own pride. I didn’t really think of myself as humble, but I didn’t think I was prideful either. I have a big perfectionism issue that I fight, which is why the last chapter went straight to the issue of needing to launch before you feel ready because if we wait to be ready we never will. We won’t feel ready and we won’t be ready. I’ll explain.

I was a slave in Egypt until my father died. I grew up a Christian and by that I mean I was raised to believe in God from childhood. In truth I never really knew Jesus personally nor did I really “grow up.” My earthly father sheltered me. He did his best and gave me tons of love and good advice (which a humbler man would have listened to).

After his death, I tried to cope, but nothing worked. When I realized my efforts were hopeless, I turned to God, said I wasn’t ready to be without a father, and asked him to be my father. What I didn’t realize at that time is that I was in a moment of humility. I had realized that I couldn’t do life without God and I asked for help.

That’s when God said, “I’ve been waiting your whole life for you to ask me that. Yes, I will Father you, but know that things will change.”

In a flash of brilliance or more likely desperation, I told God I would follow his instructions and withhold nothing from him if he would just be my dad.

My Journey into the Wilderness 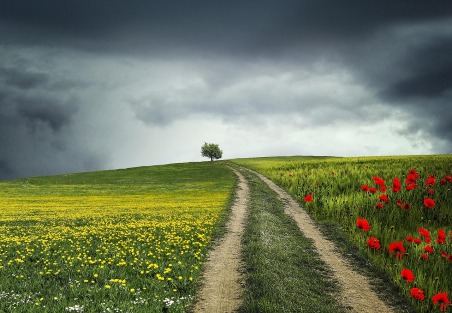 That started my journey into the wilderness and its been a great, though often difficult experience. I am guilty of being upset with my own progress. I have to repent often of grumbling at the challenges in the wilderness and at God’s unwillingness to just march me straight to the Promised Land. However, when I’m seeing/thinking clearly I don’t regret a second of my time in the wilderness.

A friend gave me a book called “Wild at Heart,” by John Eldredge, and it was the first time I saw a way to be a Christian and not turn in my man card. The way I was trained to do religion made my masculine heart cry out for mercy, but now I had a way to transverse the desert. It felt great. The purpose of wilderness time is to die to the slave mind. A big part of my slave mind was religion.

I met a great group of people to fellowship with and we journeyed together through all manner of challenge, from heartache to jubilation. I learned some key tools that I’ll discuss in future chapters.

The big reason I catch myself resenting my time in the wilderness is pride. When I stake my self-concept on being right then I’m not looking for any reason to doubt my position on things. My interactions with others happen only to try to convince them of my truth, and that includes my concept of God. We actually turn down greater revelation from God in the hopes of not feeling ashamed of being wrong about something.

Pride blinds us. One season’s truth can be useless in the next season, like wearing an overcoat in the summer. There’s a time for everything, reaping, planting, tilling, pruning, everything (Ecc. 3:1-8). How can we be in sync with God if we’re camped out in last season? The fire cloud moves on and we must break camp and follow it.

Here’s a brief example: When I went to a retreat based on “Wild at Heart,” they correctly pointed out that you shouldn’t rush the field. But in chapter one of this book, I said that you must enter the Promised Land wildly unprepared. Which is correct? Both, it depends on where you are. How do you know the difference? You walk with God.

“The early bird gets the worm but the second mouse gets the cheese.”

We live in a paradox where our Spirit is reborn our body is still dying and between them lies the battlefield of the soul. We must ‘lean not on our own understanding’…and so on.

If you’re starting to get the picture that your relationship with God is the key factor in living as a Christian then you are ready for the reason I had to write Primacy before a book on Identity.

Let’s do some definitions. I’m big on definitions. How do you know you’ve succeeded for example, if you haven’t defined success? So here’s a couple definitions I consider important.

Definition 1: a successful day is one spent with God, learning to bear His image.

Definition 2: the Promised Land is a place God wants to give you that you can’t enter in your own strength.

If you can’t think of something like that, just remember pride blinds.

Fear and Trembling, and Grace

If what you thought of as your Promised Land scares you, perfect. That’s probably it. For me, I was aware of my Promised Land although it was shrouded in fog. What I couldn’t do is conceive of getting there in my own strength. Well, if I could get there myself it wouldn’t be my Promised Land, would it?

I also didn’t feel like it counted if God just gave it to me. How’s that for a demonic agreement? We can’t work out our own salvation (Phil. 4:12 really means “continue to live from your salvation”). Salvation is a gift through Grace.

So why would God say, I saved you now go slay the giants yourself and maybe you’ll amount to something? No, all of this is an adventure of relationship. We never stop needing God and the moment you think, “it’s okay God, I’ve got this,” well, you can imagine how well that works.

Remember, it’s a journey from Glory to Glory. From Justified by God and sinning heavily to shining God’s love into the world, but still sinning and being justified by God. If we despise our status as dependent on Grace we not only resent God’s way of providing salvation we can’t receive the abundance that he set aside for us in His favor.

The theme Glory to Glory will come up repeatedly, but I promised you an answer so let’s get to it…

You can’t know who you are, your identity, without knowing the one whose image you’re created in. Whether you’re wandering the wilderness or abiding in the Promised Land your dependency on God doesn’t change.

In Matthew 16:18 Jesus calls Simon Peter by his new name, Petros. He establishes his new identity, and with it, he gives him his life’s mission. Your identity is much more than a name, or who you’re related to, or what you do for a living. It’s a way in which you’ll shine God’s glory into the world.

Definition 3: your identity is the unique way God wants to shine His glory into the world through you.

The “Primacy of God” is a book about that calling and our response. Jesus asks you, “who do you say I am?” Your response to the question will reveal much about who you are, and scary as this may be, your answers will change some with each season.

Who is Christ being for you in this season?

That’s a question you must answer before God shows you who you are in this season. In order to see who God is for us clearly, we need to humble ourselves before him and pray. (2 Chronicles 7:14)

This page under construction.

Back to Primacy Work in Progress (WIP) Page